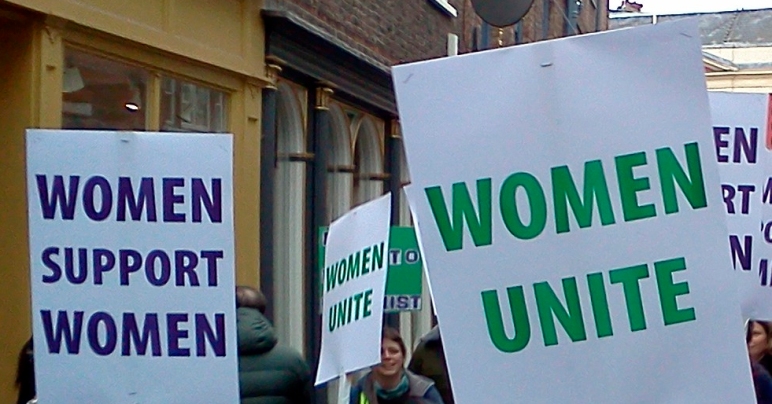 Women whom I’m friends with on Facebook post photos of other women dressed in vagina costumes at the Women’s March.

How to explain this to their daughters?

My girl only recently learned how babies are conceived. We call our body parts by their anatomical names—breasts, uterus, vagina. We avoid shy slang.

My girl does not like anyone to use vulgar words. She calls them bad words, but I correct her. There are no bad words, because a word itself does not have any moral value. Every word we invent serves a purpose. Sometimes our purpose is to hurt other people, and that’s when a word becomes a thing we shouldn’t say.

My girl did not know the word pussy as anything other than a cat until I had to explain what a then-candidate for president meant when he said that, if he wanted to, he could grab women by their pussies.

Photos of women dressed in vagina costumes at the Women’s March make me feel timid. A taboo has been broken. Some parts of a woman’s body, I have been taught, should always be covered. Breasts. Buttocks. Vagina. To expose these to view is to incite sexual urges in men.

Let’s be frank, this is what we’ve been taught, that we as girls, as women, must always be careful not to do anything that might cause a man to feel sexual desire. We girls, we women, have been taught to be responsible for men’s reactions, as if they are not capable of controlling their own behavior. We have been trained to be culpable.

Early indoctrination causes us to associate vaginas with sex, and sex with sin.

These costumed women symbolically bare themselves in a most intimate way, and I experience deeply implanted shame at seeing them. An essential part of a woman’s anatomy is reduced to sin.

shame: a condition of humiliating disgrace or disrepute  —merriam-webster.com

I define shame as the intensely painful feeling or experience of believing that we are flawed and therefore unworthy of love and belonging – something we’ve experienced, done, or failed to do makes us unworthy of connection.  —Brene Brown

In 2012, a female punk band calling themselves Pussy Riot staged a guerrilla performance at the Cathedral of Christ the Savior in Moscow to protest the Orthodox Church’s support of Vladimir Putin’s reelection. Three band members were arrested, denied bail, and held in jail until their trial four months later. All were then convicted and sentenced to two years in prison. One member was freed early following an appeal; the other two women served 21 months.

I consider this phenomenon called feminism very dangerous, because feminist organisations proclaim the pseudo-freedom of women, which, in the first place, must appear outside of marriage and outside of the family . . . Man has his gaze turned outward – he must work, make money – and woman must be focused inwards, where her children are, where her home is . . .If this incredibly important function of women is destroyed then everything will be destroyed – the family and, if you wish, the motherland . . . It’s not for nothing that we call Russia the motherland.  —Patriarch Kirill, head of the Russian Orthodox Church

There is nothing shameful about saying vagina because there is no shame in having one. Vaginas are a fact of female anatomy. We women and girls, by virtue of having vaginas, are entitled to talk about them, to write about them, to draw and paint them as we please. We are entitled even to create vagina costumes and wear them while walking out on the street if we wish. Our bodies, our choice.

In the past two [Russian] elections, some women have been used as “showgirls,” including a ballerina, a rhythmic gymnast and a former Playboy model, to attract voters.

The most prominent showgirl was Natalia Poklonskaya. Poklonaksaya, once a Ukrainian citizen, changed sides when Crimea was annexed in 2014. Putin appointed her the general prosecutor of Crimea for Russia, a job where she gained attention as a Russian nationalist and sex symbol.  –The Washington Post, Nov. 6, 2016

Why would any woman wish to shame another woman? Is it because they themselves have been shamed, because they have been taught to believe that women are intrinsically flawed, unworthy?

He is a star and a rich man, he says. Money buys power. Power buys pussy.

Russia’s parliament voted 380-3 on Friday to decriminalize domestic violence in cases where it does not cause “substantial bodily harm” and does not occur more than once a year.

My girl and I carried signs in our local Women’s March. Mine said Respect Women, Elect Women, because I believe women can take us where we need to go.

My girl’s sign said Girl Power. She likes makeup and animals and science. She wears her brother’s clothes and sings and climbs trees. She believes she can do anything. She won’t hesitate to hit if you do her wrong.

One thought on “Anatomy of Power”