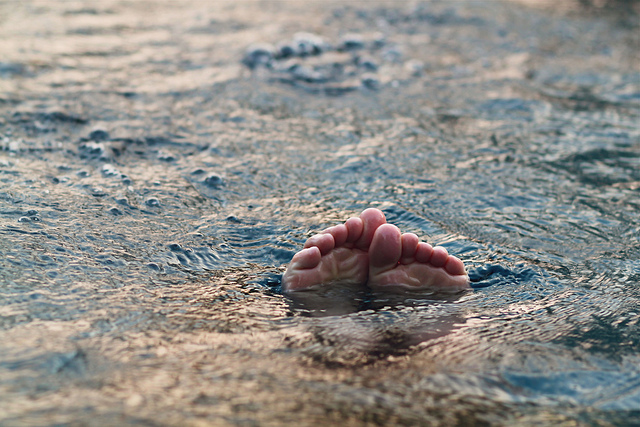 I’ve been thinking a lot lately about the title of this blog, Between. How apt this word is to describe what’s missing in most discussions about anything of relevance. How appropriate this word is to explain what I’m most interested in exploring through my writing.

I’ve been noticing how often my own views fall somewhere in the middle territory between the popularly accepted “pro” and “con” positions on an issue. This can be an uncomfortable place to sit, with strong forces pulling this way and that. We’re all supposed to be either for or against a thing. Anyone who claims to see both sides or tries to incorporate some of the good from each side in their position is said to be weak, wishy-washy, copping out, afraid to take a stand. But I think the space between is where most of us actually live.

Our common ground can be found in the gooey center. Though each of us is stuffed with contradictions, out in the world we are categorized, placed into one box or another, added to this or that list. My views seem extreme to some, mundane to others. But I bet I could find something in common with every person I bump up against. Maybe it would be only one thing, but that one thing could help us both recognize the humanity in each other. If you see me as a liberal and I see you as a conservative, but we each care about, say, preserving Medicare, why can we not come together to figure out a way to make it work?

The labels we accept for ourselves isolate us from each other. It’s not important to me to be known as a Democrat or a liberal or a feminist or an activist. Those are all badges we wear to claim membership in a particular club, and clubs by their very nature are exclusionary. It’s the fact that some are excluded from the club that gives its members their sense of elitism, of being special in a way that gives them license to then tell others how they should speak and behave in order to merit the label.

What does it mean to call oneself a Democrat or a Republican? Does it not mean that you adhere to the platform established by that party, that the party’s platform represents your attitudes and goals? But, how can this be? How can any platform accurately encompass the common goals of millions of people? Those goals would need to be so broad that no one within the party could find anything with which to disagree. We all know this isn’t how it works. Political platforms are designed with very specific, achievable goals in mind, so specific they can only appeal to a certain segment of the party, and that segment will always be the one that holds the most power. The rest of us will always be left out, though we pledge our allegiance to the party, and therefore the platform, that misrepresents our own priorities.

A single platform cannot possibly accommodate all the fractional positions of millions of constituents leading lives that differ greatly from those who hold the power. Yet we feel, most of us, a great need to define ourselves by one party or another. We want to be able to answer the question what are you? We want to belong to a club, to feel special. These groups that ask us to pledge our allegiance don’t want to hear about the ways our lives fall into the spaces between their official positions. They don’t care much about incorporating what’s good from the opposing sides. They demand loyalty as the price of membership. And so, people are convinced to vote against who they really are in the privacy of their own homes.

In my reading last year, I repeatedly encountered the term “negative capability.” It was first coined by the poet John Keats to describe the ability of a great thinker as “capable of being in uncertainties, Mysteries, doubts, without any irritable reaching after fact and reason.” Psychotherapists talk about negative capability meaning

“the advanced ability of a person to tolerate uncertainty. This does not mean the passive uncertainty associated with ignorance or general insecurity but the active uncertainty that is to do with being without a template and yet being able to tolerate, or even relish, a sense of feeling lost. ‘Negative capability’ involves purposely submitting to being unsettled by a person, or situation, and embracing the feelings and possibilities that emerge.”

We gravitate toward fixed labels, positions, platforms, I think, due to our intolerance of the uncertainty of the world we live in.

It feels uncomfortable to be in a state of questioning, of not knowing what an outcome will be, of not having definitive answers to problems. We want control over our lives. We want guarantees. So, we latch onto whomever promises they have solutions. But no one gets through this life without facing challenges. Certainty is rare. In my own life right now, my home, my marriage, my family’s ability to manage our bills all seem stable, but none of these are fixed. All of it is in flux, always. Circumstances can change, in a moment, and we have the choice only between rolling with the changes or cowering in a corner, hiding from life. The same goes for my work. I am not guaranteed success. All I can do is regularly put pen to paper. All I can do is try, every day.

All of life is this way. We are not guaranteed jobs or health care or safety. We must show up, every day, to put out small fires, to shore up structures, to build anew. Our lives play out in this state of flux, this in-between space, where everything is changing all the time. Those who can ride the changes are best equipped to survive.