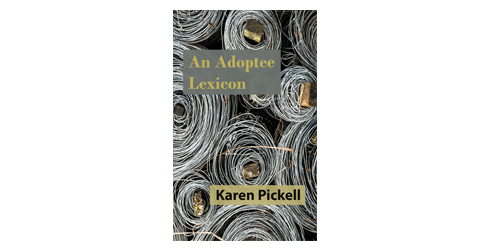 Lyrical and informative, An Adoptee Lexicon is a glossary of adoption terminology from the viewpoint of an adult adoptee.

Contemplating religion, politics, science, and human rights, Karen Pickell, who was born and adopted in the late 1960s, intersperses personal commentary and snippets from her own experience with history and statistics pertaining to child development and the adoption industry. The collection of micro essays is presented as an organically ordered glossary, along with a robust list of sources and suggested reading as well as an alphabetical index, creating layers of association between words commonly used when discussing adoption.

Pickell draws connections between contemporary American political issues and the social climate that led to a tsunami of adoptions in the decades following World War II through the early 1970s—a period known as the Baby Scoop Era—and also touches on the complexity of transracial and international adoptions.

Throughout An Adoptee Lexicon, the focus remains firmly on adopted people—their perceptions, their needs, and their right to fully exist in exactly the way non-adopted people do.

If you’ve been following me here, you’ll recall, too, that I’m publishing this book as the first project of my new micro press in order to test out the process. I’m looking forward to the conversations this book will begin and also to helping others’ words be heard in the very near future.

Update: An Adoptee Lexicon will be on sale October 18! Be sure to follow Raised Voice Press.