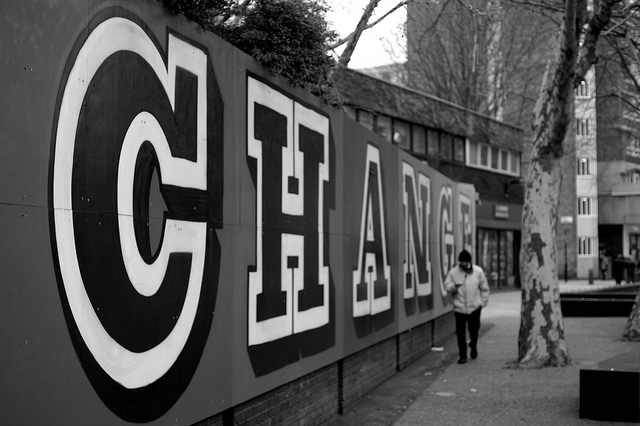 This post has been a long time coming. I began thinking about writing it back in August, when Michael Brown’s killing in Feguson first hit the news, well before yesterday’s announcement that Eric Garner’s killer would not be charged with any crime.

This post is about me, an average middle-aged white woman who grew up in the mid-western, Great Lakes city where less than two weeks ago Tamir Rice was tragically killed; me, an average middle-aged white woman who lived for a decade in the Deep South—during that time witnessing  how it remains haunted by the legacy of slavery—and who now resides in the state where Trayvon Martin was unnecessarily killed.

This post is not only about me. It is also about every other average, American white person just like me.

I grew up in a family in which overt racism was tolerated. My adoptive father often made crude, bigoted remarks at home, in front of me, from as early as I can remember. I have strong memories also of extended family members making loud, racist comments and jokes, which were met either with outright laughter in acceptance, or nervous smiles, or plain old silence.

As a young girl, I recognized early on that these comments and jokes I heard were mean and disparaging toward other people. We were taught at my Catholic school to love each other and to be compassionate toward everyone. We were taught that all people were equal and that prejudice was wrong, and I understood why it was wrong. I did not feel comfortable with the things I heard my dad and other relatives say about those whose skin was different from ours, and I never said those horrible things myself. In the privacy of our home, I sometimes got into heated arguments with my dad over the things he said, especially during my teenage years when I became more daring. I remember him calling me a nigger lover during one of those arguments. During another, he threatened to excommunicate me from the family if I ever dated a black boy–as in, even shared a banana split at Dairy Queen with one.

I didn’t recognize when I was younger all of the racial assumptions I had witlessly absorbed during my formative years. For example, my family lived on the west side of Cleveland because it was the “white” side of the city. I was warned my entire life to never venture into the dangerous black neighborhoods on the east side, and for a long time I bought into this stereotype of streets where black people lived as being unsafe. If I’m honest with myself, I have to admit that I used to feel scared if I was alone and a black man got into an elevator with me. I have to admit that as a young, working woman, if I passed a black man on a city street, I clutched my purse tighter against my body.

It has taken many years of living near and interacting with people of color to negate most of the wrong-minded lessons that were taught to me while I was growing up—taught to me by my dad, by my extended family, by neighbors and friends, by employers and politicians, by magazines and TV shows and movies. I am only now waking up to how often I neglect to think critically about the ideas of “normal” and “acceptable” that are streamed into our lives on a daily basis, ideas that boost the esteem of those who are already privileged while categorizing anyone who doesn’t fit the mold as “other.” I recognize that the misperceptions I absorbed are, to a certain extent, imprinted on my brain in indelible ink. I must be diligent in working to scrub them out, in endeavoring to cover them over with corrections.

My own children have absorbed far fewer racial prejudices than I had at their ages, and I attribute this to the many open conversations we have at home as well as to my children having friends who are racially and ethnically diverse. It has been a priority for me to defend my children against developing bigoted ideas. Until recently, I thought I’d been doing a good job of this. However, over these past several months I’ve wondered if I am really doing everything I can do to create the best possible world for my children.

I am writing this today because I’ve concluded that no, I have not been doing the best I can do to combat racism.

Too often, I am still that girl who remained silent when she heard relatives or friends making racist comments or jokes. Too often, I walk away from a bigoted conversation rather than express my disagreement with what is being said. The people who continue to make racist comments and jokes do so because we who remain silent allow it. We condone their racist attitudes by not expressing our disapproval. I allow racism a space in my own children’s lives when I am not brave enough to say something in response to the bigoted comment another parent makes or the racist joke a relative tells. These people feel comfortable sharing their bigotry with me because they see the color of my skin and they assume I’m on their side.

Yes, what our American society desperately needs are reforms of the many broken systems in which racism has been codified and institutionalized. Yes, we need big changes. But trying to enact big changes is futile while so many people like my biased relatives continue to reinforce each other’s disdain of all those “other” people. The protections that have been put into place thus far to encourage equal treatment under the law were necessary, and they have not failed entirely, but their intended goals have been stunted by the will of a great number of average white people who still don’t get it. If you haven’t noticed how loud they can be, it’s because they’re loudest behind closed doors.

We, the average white people who do get it, have allowed this to happen. In thousands of regular, everyday moments, we have allowed the bigoted attitudes that fuel our current system of injustice to flourish. I know that I’m not the only one witnessing these seemingly small acts of racism from my relatives, friends, and acquaintances on a regular basis. In fact, I bet most average white people like me know exactly what I’m talking about. Many of us have witnessed bigger, more devastating acts of racism from our white brethren as well. We know that what we witness is wrong. We feel the ache of its wrongness in our bones. Yet we smile nervously as we turn away. We create safe spaces for racism.

Nothing will change if we ourselves do not change.

I am resolving, from this day forward, to challenge racism whenever and wherever I witness it. When I think about how I will do this in my every day, ordinary life, I feel exhausted. I’m not planning to attack anyone, yet I expect that I will be attacked. I am not intending to pick fights, yet I know some will fight against me to maintain the status quo. Some are more interested in keeping the so-called peace than in confronting wrongdoing. But I must confront it. If I do not, I will continue to be part of the problem. I can no longer remain silent or avert my eyes.

None of us can if our children are to fare any better than we have.