An Adoptee Lexicon Is Now On Sale!

Available wherever books are sold including: 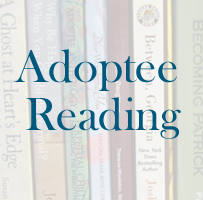 To commemorate the end of the decade, Adoptee Reading has curated a list of 100 adoptee-authored books published between 2010 and 2019. This is not a comprehensive list; we were forced to leave out numerous additional titles in order to get down to a perfect one hundred. We’re excited and END_OF_DOCUMENT_TOKEN_TO_BE_REPLACED

Writers Who Inspire Me

Header photo adapted from "Between the Doors" by m-louis .® (Flickr).

Note: WordPress places ads on sites from time to time. The ads are not mine, nor do I earn any money from them. If I could remove them without paying WordPress, I would.
%d bloggers like this: